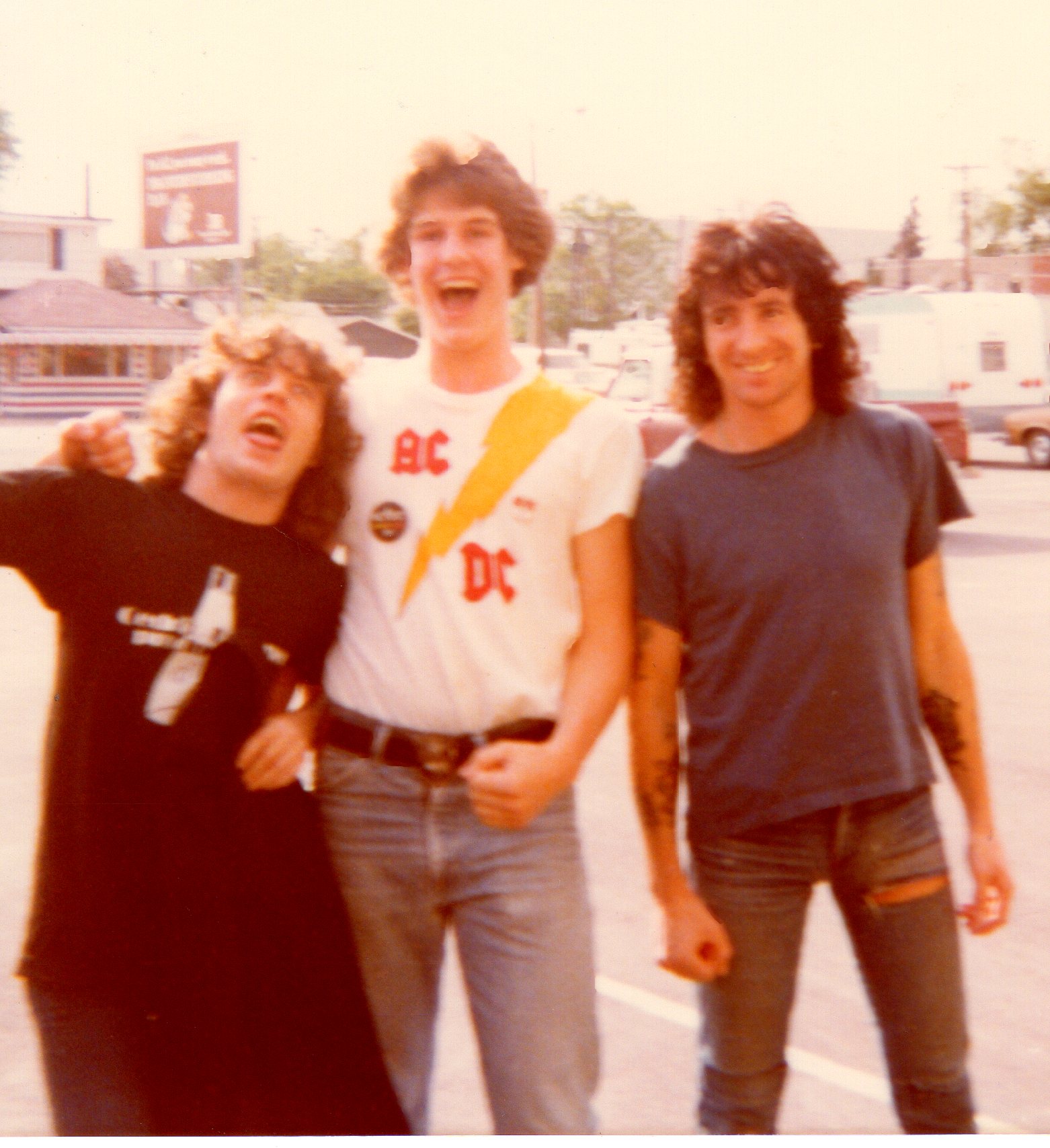 On the morning of May 18, 1979, my friends Wade, Mark, and I made our first Rock ‘N Roll road trip. Little did we know that this day would be one of the most memorable days of our lives. AC/DC were set to co-headline with UFO in Springfield, Illinois. We had become rabid AC/DC fans ever since we heard the title track of ”Let There Be Rock” on KSHE-95 in our hometown of St. Louis, Missouri. We were also UFO fans and had seen them a few times already, but since Michael Schenker was now out of the band our interest had waned. This was all about the opportunity to see Bon, Angus, and the boys.

We were armed with only three things: The name and addresses of the venue, the location of the motel that booked the bands, and the local record store that sold tickets. We were confident that we would be able to score tickets the day of the show since we figured a cow town like Springfield wouldn’t have much of a Rock scene.

“UFO & AC/DC live at The Armory tonight SOLD OUT,” read the sign on the record storefront when we arrived. Guess this cow town rocked after all. Devastated, we ventured off to the Bel-Air Motel where the band was supposedly staying. We thought maybe we could still try and get our albums signed since we had come all this way.

After sitting in the parking lot for a short time we saw an out of date tour bus pull up. As we stared with anticipation, out popped Bon, Angus, Malcolm, Phil, and Cliff! What a thrill to finally see and talk to our rock heroes. Road haggard and all, they took the time to sign all of our albums and homemade posters. Wade had even made a scrapbook of all the articles that we ran across in the press, which they found appealing since some of the stuff they hadn’t even seen.

We explained our situation about the sold out show and how we traveled 100 miles and all. I don’t remember if it was the road manager or one of the band members that told us not to worry they would take care of us. We just looked at each other like ”Holy Shit!”. Could this get any better or what?

As the band retreated to their rooms to clean up for the show, Malcolm asked us if we wanted to hear the new album. We were like, “What new album?” and Malcom said ”Highway To Hell. We’ve got a tape of it on the tour bus.” Okay this isn’t really happening. AC/DC left us on their tour bus, alone, and we listened to their new album, months before the U.S. release.

Of course we were snapping pictures all along the way. No digital cameras back then so eventually we ran out of film. After a while the band, one by one, started to get back on the bus. Oh, who’s this guy? Just Pete Way of UFO there to share a drink with Cliff and Bon.

We followed the bus to the venue and basically went right in with the band and crew before being given backstage passes by their road manager. We started watching the show from the wings before a roadie suggested we move out front where we could see better. They proceeded to deal out a blistering set of pre-Highway To Hell classics. To be honest, I don’t even remember seeing UFO that night, but I’m sure we stuck around to see their set. We were just so amped up, anticipating our return to the Bel-Air Motel.

We might have been getting a little greedy here, but we thought, what the hell, let’s see if any of the band are hanging around. All of the band members were cordial, but Bon definitely came off as the friendliest, so we thought let’s knock on his door and see if he would be interested in a cold beverage from our cooler. Jackpot.

Eventhough Bon had a groupie with him he was more than happy to invite us into his room to chat. It didn’t hurt that we had a cooler full of cold beers. We proceeded to grill Bon about the stories behind some of our favorite songs, like ”TNT”, ”Dog Eat Dog” and of course ”Whole Lotta Rosie”. When asked about the only appearance the band had made in our hometown of St. Louis on the ”Let There Be Rock” tour at the 21 and over rock club Mississippi Nights (we couldn’t go because we didn’t have our fake ID’s yet and we vowed to never miss another show there, and we didn’t). Bon had vivid memories of that night because the band brawled with the club staff after the show. Not sure what started the brawl but it was inconsequential to the story. That was the band’s reputation. Oddly enough, Bon almost got into it again next time he would be in St. Louis. More on that in a minute. Anyway, the current “Rosie” was getting a little anxious so we figured we better get out of there. We told Bon we hoped to see him again soon and shook hands goodbye.

Fast forward to July 1st of that same year. AC/DC was set to open for up and coming arena rock band Triumph at Kiel Auditorium in St. Louis. No lack of tickets for this one. We moved early and got 2nd row center. Thanks to my friend Wade’s due diligence we located the band’s hotel in advance. The three of us arrived at the now defunct Roadway Inn in downtown St. Louis. At least it was a proper hotel this time. We had more albums to get signed that we had picked up since our last meeting (we grabbed every import or special edition we could find). This didn’t go unnoticed by the band. They were surprised that we had some of the Australian imports. Slowly the band appeared one by one and obliged our autograph requests. Again, Bon was the one to hang around and chat with some of his biggest fans.

Needless to say, the show that the boys put on trumped the headliners even with all of Triumph’s lights and pyro. After the show, we made it back to the hotel to see if we might get lucky enough to run across Bon. When we saw Bon’s lady acquaintance we didn’t like our chances of hanging out with him this time because she was smokin’ hot. Not to worry, Bon said “Come on up boys and bring the cooler!” Wow, here we go again. We saved some film this time to document the experience.

As we were enjoying some hometown brew (Busch beer), we noticed a large bandage on Bon’s big toe so we asked what happened. It seems Bon’s lady friend used to tag along with Rik Emmett (Triumph’s frontman). Well I guess she told Bon that Emmett didn’t think much of Bon’s stage persona or his vocal talents. I guess sometime backstage Bon confronted Mr. Emmett with the intention of kickin’ his ass back to Canada. Well Rik realized he wouldn’t look too good with a black eye on stage, so he quickly denied, recanted, or whatever to avoid a beating. Somewhere along the way, Bon’s foot and a large lamp collided resulting in much blood shed. This same story (albeit Rik Emmett’s version) can be heard on KSHE-95’s “Real Rock Museum” on their website. Good stuff.

We proceeded to empty our cooler with Bon, although he did ask if we had anything harder than beer. We got a good laugh out of that at least for the time being. After another hour or so we went on our merry way with memories to last a lifetime.

We hoped we had a friend for life in Bon. We didn’t have any idea how popular AC/DC might get in the future, but we held out hope that Bon would still remember the kids with the cooler. All of that came to a sudden, shocking end when we heard the announcement early the next year, February 20th, on KSHE’s 5 o’clock evening news that Bon had been found dead after a hard night of drinking. Unfortunately, his friends did have something harder than beer that night.

Rest in peace Bon, we’ll bring our cooler when we see you on the other side.