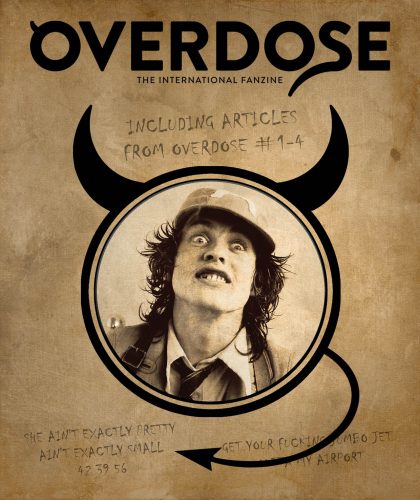 This edition of Overdose is a collectors item issue. Limited to only 100 copies with articles from issue #1-4.

Malcolm Young discuss: AC/DC’s back catalogue – In autumn 1992 I interviewed Malcolm Young for a now long extinct music magazine called Metal CD. AC/DC were always a formidable live act, but studio-wise they’d been in the doldrums for most of the 1980s (Fly On The Wall, anyone?). Then came 1990’s platinum ‘comeback’ album, The Razors Edge. AC/DC were on the upswing again, but were as notoriously press-shy as ever.

Sons of ‘DC: Airbourne – Joel and Ryan O’Keffee are tearing it up around the world with their high energy, take no prisoners rock and roll and they leave the fans screaming for more. Overdose sat down with the brothers to learn more about the band and their great affection for AC/DC.

Bedlam in Belgium –In contrast with meticulously planned video shoots, this is the tale of an AC/DC gig that was somewhat less smooth. Philippe Derouck tries to document what really happened that night of the infamous gig about which AC/DC wrote a song on the “Flick Of The Switch” album.

Family jewels – As you may well know, AC/DC like to keep things in the family, so who better to employ as a tour caterer than Brian’s brother Maurice? Niclas finds out about life on tour and what it was like to grow up with the flat cap loving frontman.

Breaking balls in New York City – For the album “Ballbreaker”, AC/DC decided to record in New York at the famous Power Station studio. Rick Rubin, who had previously worked with the band on the song “Big gun”, was the producer and Mike Fraser the sound engineer. Rory Romano ended up being Fraser´s assistant for the recordings in New York and here he tells the story of those troubled sessions at Power Station.

Interview with Mike Fraser – Mike Fraser, who started out working on “Ballbreaker” as the sound engineer, but also ended up getting a co-producer credit, tells the story of the recordings of the album. It started out with quite a few difficulties in New York and it wasn´t until they moved to LA, that things got back on track.

A night at Atlantic studios – It is remarkable that a brief recording session by an unk-nown band made in the late seventies at Atlantic Recording Studios in New York City is still of interest today. But then you realize that this little five piece band from Down Un-der would become one of the biggest rock and roll bands in the history of music: AC/DC.

Interview with Jimmy Douglass – Jimmy is the music producer that also happened to be the recording engineer for the classic live album “AC/DC – Live from Atlantic Studios” in 1977. This interview is a outtake from Overdose #3.

Interview with Barry Bergman – Barry Bergman worked closely with the band in the late seventies and was quite instrumental in breaking the band. This interview is a outtake from Overdose #3.

Shaking the earth with AC/DC – In the summer of 1978 a then relatively new band called Yesterday & Today, who had just released their second album “Struck down”, got the chance to open three shows for AC/DC in Texas. Y&T´s singer Dave Meniketti recalls those crazy shows and also the European tour they later did with them in 1982.

Alexander Young – Alexander Young was one of the elder brothers of Angus, Malcolm, and George Young. Better known as George Alexander, the alias he would use as he worked his way to fame in the music business.

I’m a rebel, the unknown chapter – Over the years there has been many a rumour about AC/DC, they’ve been accused of everything from devil worshipping to inciting Bedlam in Belgium, but there are one rumour in particular that refuse to go away within the AC/DC fan community, despite never having been addressed by the band. And it’s the rumour about an existing AC/DC recording of “I’m a Rebel”.

The dirtiest story ever told – Phil Sutcliffe tells us the story of when AC/DC came to England in 1976.