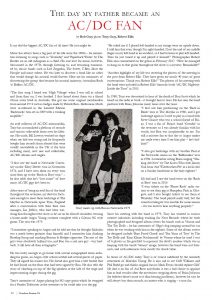 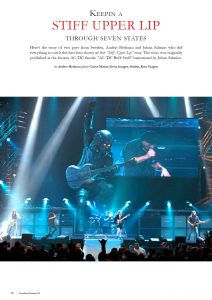 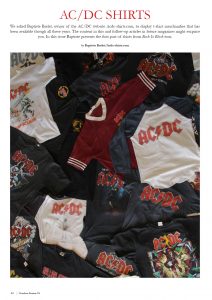 Let there be rock – The legacy of Malcolm Young

Making of That’s The Way I Wanna Rock’n’roll – In 1988 Steve Carr got the opportunity to appear in the filming of an AC/DC video. Here’s his story

The day my father became an AC/DC fan – Rob Gray tells the story of his father, Tony, who witnessed AC/DC in the early years and got the chance to meet the band.

Hammersmith homecoming – Following AC/DC’s intimate shows at the Roseland Ballroom in New York, the Columbiahalle in Berlin and the Circus Krone in Munich, alongside playing support to the Rolling Stones in Germany and Canada, it was England’s turn to see the band getting back to basics in an intimate setting.

Keepin a stiff upper lip through seven states – Here’s the story of two guys from Sweden, Anders Hedman and Johan Salmins who did everything to catch the first four shows of the ”Stiff Upper Lip” tour.

Mike Fraser about the stiff upper lip tapes – Mike Fraser has worked with the band several times over the years. When it was time to record ”Stiff upper lip” he was summoned once again and did the engineering and mixing of the album. In an exclusive interview with Overdose he looks back on the recordings of the album in Vancouver and what it was like to work with the band and the late George Young.

Propping up the stage – The first instalment in a series exploring how the AC/DC live spectacle has evolved over the decades,  how AC/DC have always been able to carry a show without all the bells and whistles.

AC/DC shirts – We asked Baptiste Brelet, owner of the AC/DC website Acdc-shirts.com, to display t-shirt merchandise that has been available though all these years. The content in this and follow-up articles in future magazines might surprice you. In this issue Baptiste presents the first part of shirts from Back In Black tour.

Collectors items – Stiff Upper Lip was released 19 years ago on February 28, 2000 on East West/Elektra records. During that time, the record company invested in some unique promotional items to promote and advertise both the album and the tour. Today, some of these rarities have become very difficult to find and have increased in value over time. Here, we take a look at some of the more unique and collectible items from that era, as well as at a selection of collectible promotional and official CD releases.