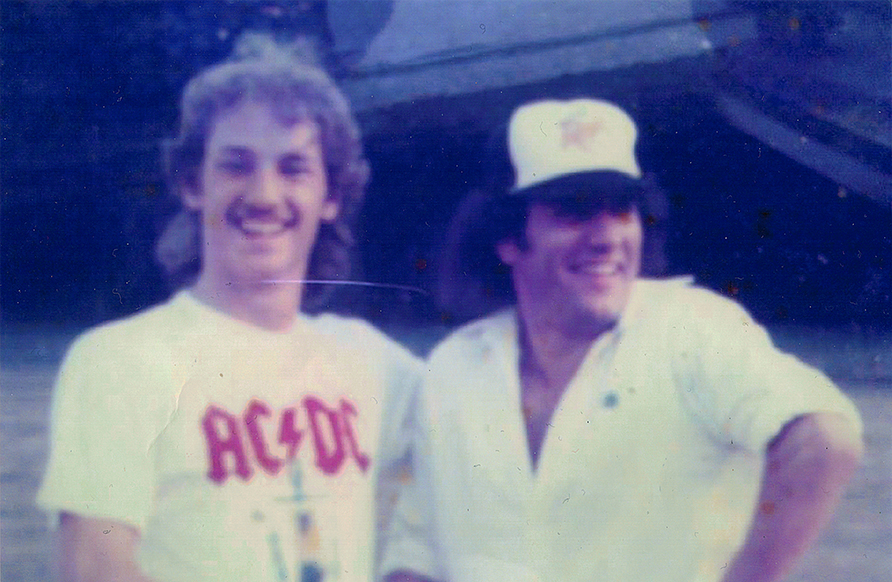 To set the scene, it was England in the 1970s and mods, punks and rockers ruled the British rock scene. When an Australian band with a schoolboy guitarist and Scottish lead singer came out of nowhere, the game was changed. Having made a name for themselves in no time at all, the sudden and tragic death of their lead singer cast doubts to whether or not we would ever see AC/DC back in England. Then came the announcement of a new lead singer, some Geordie bloke in a cap. AC/DC were reborn and all we wanted to do was to see them live once again. The “Back In Black” tour was out of my reach but fortunately I would not have to wait long. Here is the story of my first AC/DC gig.

It was Tuesday 19th October 1982, my excitement was building and the adrenalin was pumping, I was 15 years old and having missed out on the “Back In Black” tour, I could not wait to see the band I had grown to love.

I had saved my money all Summer for my trip to London, to witness AC/DC performing live on the “For Those About To Rock” tour. Having avidly watched the clock all day, my heart pounded with excitement as I finally entered the arena. I was blown away by the sea of denim and leather (as far as the eye could see), the atmosphere was truly electric. Soon enough, I found myself battling the crowd to get to the front of the merchandise stand only to find a strange selection of merchandise on offer.

With a little apprehension, I asked for “The 82 with a programme, please”. As one would expect, the t-shirt was black with a large map with the letters ”Europe ’82” on the back. Perhaps more unexpected was the front of the t-shirt, which was emblazoned with a picture from the “Let There Be Rock” movie.

Unperturbed by the weird merchandise stand, I carried on my way, desperate to see the stage that I had waited so long to see. As I made my way to my seat, I quickly realised that I was going to be seated up high. I didn’t care though, I was about to see Angus and co. for the first time. As I settled into my seat, I noticed that I was level with the stage on Malcolm’s side, meaning that I could see lots of people buzzing around backstage from my seat. It was interesting to see what was going on behind the scenes. The only downside to my view was that it would be hard to see Phil and his drum kit from such an angle.

Time seemed to stand still as I awaited the band’s entrance. I remember thinking “Surely they will be on stage soon!” The wait seemed as if it would never end. Fortunately for me, it was soon over, when the lights dropped and the screams and shouts became deafening. The slow, loud riff of “Hells Bells” began, I’d never heard anything like it! Brian smashed the bell with a sledge hammer and the energy was palpable.

Midway through “Let There Be Rock”, Angus was deep into his solo and disappeared from the stage, only to re-emerge on the shoulders of someone, surrounded by bodyguards. They made their way out into the crowd, Angus still playing perfectly. It was amazing to witness this pure guitar genius playing live amongst so many people. Unbeknownst to the crowd marvelling at Angus’ talents, Brian had quietly left the stage. From my high-up vantage point I could see him, cap off, towel around his neck, having a drink while Angus was busy out front enjoying himself! At one point I glanced backstage and spotted Brian and the stage crew playing darts!

The music continued to blast, with Malcolm, Phil and Cliff thumping away while Angus did what he does best, eventually returning to the stage on Brian’s shoulders. It was an amazing end to an amazing show. Although fortunately, it was not to be the end. By the end of an incredible encore of “You Shook Me All Night Long”, “T.N.T” and “For Those About To Rock”, my ears were ringing and my grin was as wide as it could possibly get. I could not wait until the next album and tour.

Fast forward to 1984. Yes, the year of the “Flick Of The Switch” album and the inaugural Monsters Of Rock at Donington, an event that was to be headlined by AC/DC. I’d bought the album, bought the tickets and was the proud new owner of a Beige Ford Capri 2.0L, the world was in my hands. My mates and I (armed with our Donington tickets) set off early in the morning for the long drive to the race course.
It was awesome, flags, tents, bottle fights, a whole day of music. Motley Crüe, Accept, Y&T, Gary Moore, Ozzy Osbourne, Van Halen and of course AC/DC. What a line up!

The day played out like nothing I had witnessed before, there was such a happy atmosphere, one that led me to go to the festival for many years afterwards. The bands playing before AC/DC were great but I yearned to see AC/DC live again. When they finally hit the stage, it only took the first few notes of “Guns for Hire” for me to feel that familiar rush of adrenalin.

Singing and rocking to the greatest rock’n’roll band in the world was as amazing the second time around as it had been the first. The set slightly differed from 1982, with the addition of “Guns For Hire”, “Bad Boy Boogie” and “Flick Of The Switch” and this time Angus stood high on top of the Marshall stacks playing his solo. It is safe to say that AC/DC were incredible and blew the rest of the bands out of the water, for me there would never be a band in the world that would come close to them.

To top everything off, that day we had heard a rumour that Brian would be playing in a charity cricket match in Hampshire the day after the show. Eager to see him up close, we drove through the night (all the way down from Derbyshire) to get there in time. To put this into perspective, I believe Brian was flown in a helicopter because of the distance! In a time long before satellite navigators and mobile phones, we miraculously found this cricket pitch, expecting it to be packed with AC/DC fans, only to find that it was quiet and peaceful with only about a dozen fans there.

My friend Barry Mooring and myself sat patiently watching the match and got chatting to a lad on his own, waiting until we could get a chance to meet Brian. Suddenly the ball was hit out of the ground so whilst they were looking for the ball we took the opportunity to run onto the pitch. Brian was taken aback and just laughed. He was gracious enough to pose for photos and sign my Donington ticket and “Flick Of The Switch” album, continuing to sign things well after the ball had been found and the game been restarted. He was such a nice bloke and it was a genuine pleasure to meet him.

Having met the man himself, I was particularly sorry to hear about Brian’s hearing problems, especially after the “Rock or Bust” tour had started so well (Dublin 2015 was an awesome show!) Later into the tour, I was fortunate enough to meet Cliff, Chris and Stevie at their Prague 2016 show. Still having my original 1982 programme, I was then overwhelmed when Angus signed my original programme from the first time I saw AC/DC live.

Over the years I’ve met so many friends because of ACDC.

Our ACDC. Our Family!