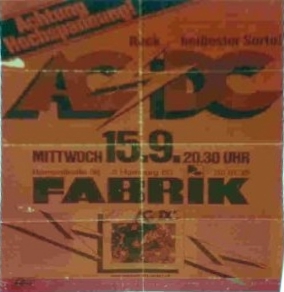 Over the years there has been many a rumour about AC/DC, they’ve been accused of everything from devil worshipping to inciting Bedlam in Belgium, but there are two rumours in particular that refuse to go away within the AC/DC fan community, despite never having been addressed by the band. The first one being the infamous “12 of the best” tape, that was allegedly presented to the band in the early seventies by their record company, only to be promptly dismissed by Malcolm, who threw the tape back into their faces with the epic one-liner “We ain’t a greatest hits band”. The second rumour to have swirled for the last four decades or so is that of an existing AC/DC recording of “I’m a Rebel”. Interest piqued, Overdose’s very own Johan Kreku set about attempting to uncover the truth behind this rumour that simply won’t go away

It all supposedly began in 1976 when AC/DC had just started the monumental journey that (spoiler alert) would end in them conquering the world of rock. What we do know for definite is that it was Spring ’76 when the band made the pivotal decision to move their base from Australia to England, a decision that would quickly pay off. By September they were booked as a supporting act for Rainbow for the duration of their European tour.

Coincidentally, Alexander Young, elder brother of Angus and Malcolm, lived in Germany at the time, working as a well-known and successful songwriter going by the name George Alexander. So it was during this tour that Angus and Malcolm decided to pay their big brother a visit. AC/DC played at Fabrik in Hamburg on 15th September, 1976 and in the audience was Rudy Holzhauer, an employee of SMV Schacht Musikverlage, Alexander’s publisher. His colleague, Benjamin Schacht, recalls,“Rudy told me he was at the concert and became convinced that they would become a big band at any time. He probably wanted us to do a deal with them.”

It was following this very gig that the band spent some time at Alexander’s house in Hamburg, later that day, visiting his studio, Maschen studio. They ate breakfast (in Bon’s case: a bottle of bourbon) and recorded for a few hours. It was during this session that the band allegedly decided to lay down a track. The song in question “I’m a Rebel”. Making this rumour all the more difficult to prove or disprove, the studio wasn’t very crowded that day. It was just the band, Alexander Young, Rudy Holzhauer and Holger Magnussen, their sound engineer. “Angus and Malcolm agreed to do that song immediately, because they wanted to do Alex a favour, to record the song. The reason why they didn’t release it, I don’t know, because it was similar to the stuff that they did at that time”, Rudy Holzhauer remembers. Holger Magnussen similarly recalls his time spent with AC/DC in the studio, “The song was recorded on 8-channel analog tape, which was standard at the time.”

Further supporting this recollection of events are Wolf Hoffman and Udo Dirschneider of the band, Accept. “I’m a Rebel” was of course the song that catapulted Accept’s career a few years later. Wolf Hoffmann says “The song was presented to us by our publisher and I think Alexander Young was living in Hamburg at the time and our publisher also lived there. So he heard that song and suggested it to us. He said: ‘Well, you guys are a metal band and write okay songs but here’s a professional song and it’s probably gonna be a huge success for you’, of course it wasn’t but it’s still a good song and we still play it to this day. It was an attempt by our publisher to get us something that’s more radio-friendly and give us more success on the radio. There was a original version with Bon Scott, that I think AC/DC recorded as a favour to Alexander. From what I remember it wasn’t a studio recording, it was maybe them just doing the demo like in a rehearsal room.”

Wolf’s bandmate, Udo Dirkschneider, supports this version of events, “To write simple songs is the most difficult thing to do, you can make very complicated songs and no one will understand them. But to write a simple song that everybody can relate to you need melodies that people can remember. This is very hard to write but this song has it all. I don’t really understand why AC/DC never did this song?” He then went onto to share another tidbit of the AC/DC puzzle, “Another interesting story is when we did the first Accept album. Two guys came into the studio, interested in producing the album. We said ’No we are going to keep on going with our producer’ and then we found out that these two guys were producing AC/DC, they were George Young and Harry Vanda.”

Making things even more confusing is bassist Mark Evans, throwing another possibility into the mix when asked about “I’m a Rebel”. He says “It is possible that the boys might have done that without me, because Alex used to play bass also, and Bon had done some drumming as well”.
One thing that we do know for certain is that whether recorded or not, this track was never officially published. If it was recorded, as most of our evidence suggests, just why is it missing from Bonfire or Backtracks? Our friend from earlier, Benjamin Schacht, claims that the publisher, SMV, paid the studio costs but because Schacht Musikverlage does not have an agreement with AC/DC on the publication of the song, it cannot be released legally. “Alex never gave a permission to release it. He was always scared that his brothers would not like the idea of the song getting released” Interestingly, his colleague Rudy continues the saga.“If they want to release it on a b-side or whatever, it has to be alright by the publisher and Alex’s wife. If they don’t give permission, the tapes remain in the archives.”

All in all, the story behind “I’m a Rebel” is a confusing and intriguing one that even after speaking to several of the people involved, I am not much closer to getting to the bottom of. There has been several of rumours of George Young and Harry Vanda being in Germany at the time, but they are still yet to be confirmed. Before wrapping things up, I would like to thank No Nonsense Webzine (now taken offline), who published the first attempt in finding the truth the persistent ”I’m a Rebel” rumour.

It’s safe to say that the band were in the studio in Germany, but whether or not the song will ever be officially released seems to be down to a handful of people, whom I am sure could be persuaded to give permission by a certain Angus Young